Rtsch ffft, rtsch ffft … pronounce it out loud … rtsch ffft, rtsch ffft, rtsch ffft … Where are we and what’s going on? Similarly to the beautiful performance When the ocean sounds (Wave Moving Through Water) (2018) by the artist David Horvitz, exhibited in 2018 at Fanta Spazio in Milan at the exhibition “Fantasy is a place where it rains”, the current Berlin exhibition at the Gr_und non profit artist-run space, titled Rtsch-ffft is based on onomatopoeia and this curatorial decision was made already in the title. The use of this neologism would probably arouse in the viewer a suggestive image of the gesture of drawing, if only the word was visible somewhere during the exhibition. Indeed, for those entering from the street, one is so attracted by works that are quite intense in their physical substance, that the title itself, placed on the A4 paper hidden in the corner, doesn’t count so much in the general perception of the exhibition.

Already here, however, two electrifying questions arise. First, the gallery is known for its carefully developed texts and concepts. Rtsch-ffft is one of the few times when the physical values of drawing, painting and sculpture have been emphasized so much more than the theoretical concept of the exhibition. It seems that the aesthetic essence, the corporeality itself, has remained free, unencumbered by descriptions, pure and non demanding. The title therefore plays its role perfectly if it’s discovered in reverse. First you undergo the exhibition, and only after you understand both the relevance of the suggestive neologism and the decision not to add any explanations and descriptions.

Secondly, still observing the slightly different values ​​of Rtsch-ffft compared to the regular activity of the Gr_und, this independent space usually presents performances and ephemeral installations. Just look at the recent LN2 VAPOR by Benoit Ménard & Théo Pożoga (10.2019). This multidisciplinary gallery conducts also avant-garde researches as well as holds conversations of artists and activists on both personal and current global-level issues such as Plant me (06.2019), the performance by Emmanuel Hubaut in collaboration with Karine Bonneval. On the margins of anthropomorphization, Plant me was a performance in which the plant “speaks” in relation to guitar improvisations in an attempt at communication and hybridization tinged with irony. The other example of the Gr_und event was Ritournelles by Anaïs Héraud-Louisadat and Till Baumann (09.2018), which dealt with the relationships between sound and image. “Ritournelle” is a French term that describes small, often melodic phrases that run repeatedly and are often sung in ritual contexts, children’s songs, publicity or political slogans in demonstrations. A more personal event was the performance JOURNALs 1988 – 2018 (04.2018) by Camilla Graff Junior, where the artist read and enabled the participants to investigate her diaries – twenty-six notebooks hand-written during her life. HOKUSPOKUS (12.2018) was a collective exhibition on illusion, mirage and other phenomena based on the quotation by Gustave Flaubert “There Is No Truth. There Is Only Perception”. Events not only rarely remained still, but they were usually well explained in terms of clear concepts, sometimes poetic, packaged in a roomy showy box. What has changed this time?

The usual team of this non-profit artist-run space is composed by James Verhille, Damien Sayer, Anna Frick, Cedric Mantel and Nina Blume. Using multidisciplinary methods of visual art, performance, sound and linguistics, it’s a platform for experimentation and requalification of the status quo of the commercial art world. Rtsch-ffft inaugurated 16.11.2019 is organized by James Verhille, Matthias Reinmuth and Johannes Mundinger. Formally, the collection of works almost entirely presents the abstract and ultra-modern pictorial vision – reflective colors, geometric-organic and three-dimensional shapes. In addition to being visually current at first sight, the exhibition inevitably becomes the natural extension of art history due to the unalterable values, so emphasized here, of traditional drawing, painting and sculpture.

The total of eight images/paintings by Tomoko Mori, Johannes Mundiger, Moritz Neuhoff, Enrico Bach, Sophia Schama, Benjamin Appel, Matthias Reinmuth and Nils Leimkühler are displayed on the walls. The installation by Lotta Bartoschewski Breaking News (2019) is lying on the floor next to the sculptural neon of Antje Blumenstein titled Three lines, eight corners (2019). Much of the activity of Johannes Mundinger, an artist and curator is murals, which he creates all over the world from Serbia to the United States. Not surprisingly, his style is appreciated everywhere, it’s gracious and consistent. The touch of his “roller”, a pictorial gesture of spray on glass, resembling the very individual signature, we see in the work Feuerstiege – Yeoju (2019). An exhibition hosts two artists Moritz Neuhoff and Nils Leimkühler who make part of Nartur Kunstgruppe, a well-known art collective in Berlin.

The finesse of interpenetration of colors and shades on the paintings of Matthias Reinmuth is no less fascinating. It’s a pure sensory experience and as difficult as it is to explain, it’s seductive and makes us sink into them effortlessly. The picture draws in so much that it may seem dangerous. Two other images that keep us in front of them for a long time are Hz15 (2019) by Moritz Neuhoff and RDGS (2018) by Enrico Bach. Both refer to the values ​​of drawing and painting such as color and shape, but the discoveries of augmented reality give us new sensorial abilities: touch – smoothness or roughness of the material, and convexity – where the metal tube on the image seems to come out in front to black stains in the background, or where the perfectly flat and smooth surface exudes a strong illusion of the trace of paint left by a brush.

It is significant for our times that the still image becomes more and more smart, multi-dimensional and multi-sensorial. At the same time, everything that physically remains on the floor somehow approaches the biological world (usually dead). At Gr_und, giving the general look at the Rtsch-ffft, we are exposed to this part of art that is monopolized by digital vision. Each artist will be expressively moved by the questions of completely flat painting and drawing without sound. Even the only truly dimensional sculpture at the exhibition resembles the white extension PC computer cable! Although the Rtsch-ffft doesn’t make direct reference to the subject of digitalization, its overall experience intuitively recalls a certain nostalgia for the physicality of the artistic gesture.

It’s right that in times of computerization there are thousands of artists who in some way refer to the digital world, to the world, despite everything, still new and frightening. To list only a few young artists: Gioia di Girolamo, Ben Janowitz, Agnese Guido, Irene Fenara, Martina Corà and Rachele Maistrello in the Italian context, as well as Maurice Mbikayi abroad. With different methodologies, artists investigate the relationships of both man himself and his perception, with the digital world, one that has already changed us, or for those who don’t yet believe it, that questioned the circumstances in which we live. 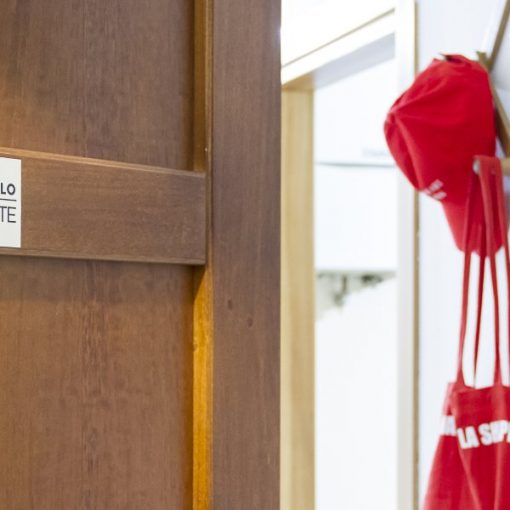 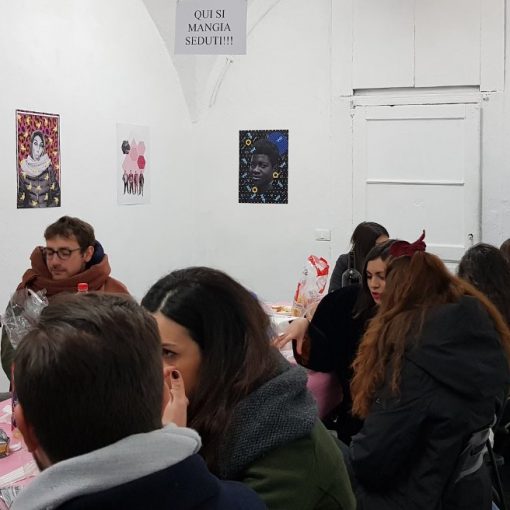 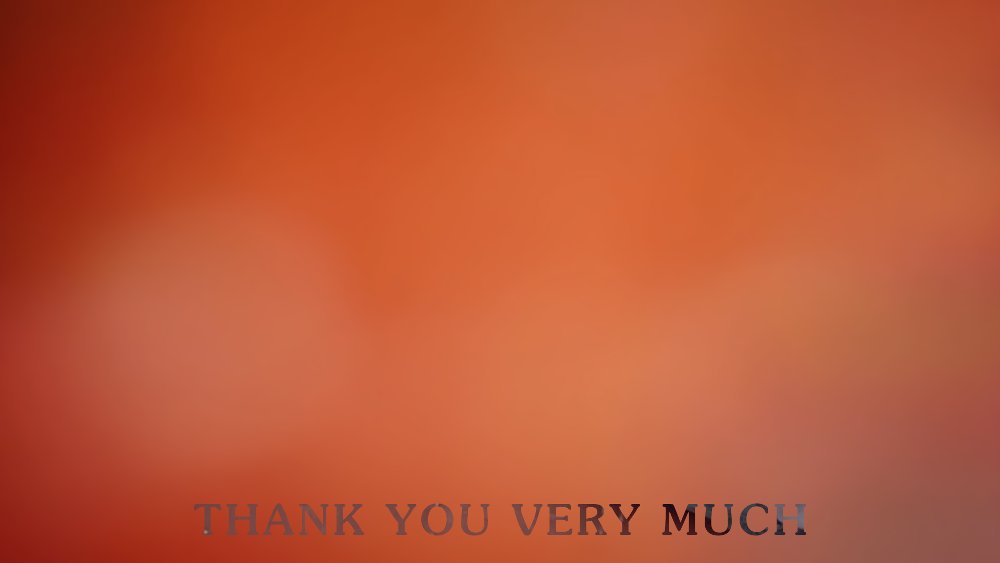 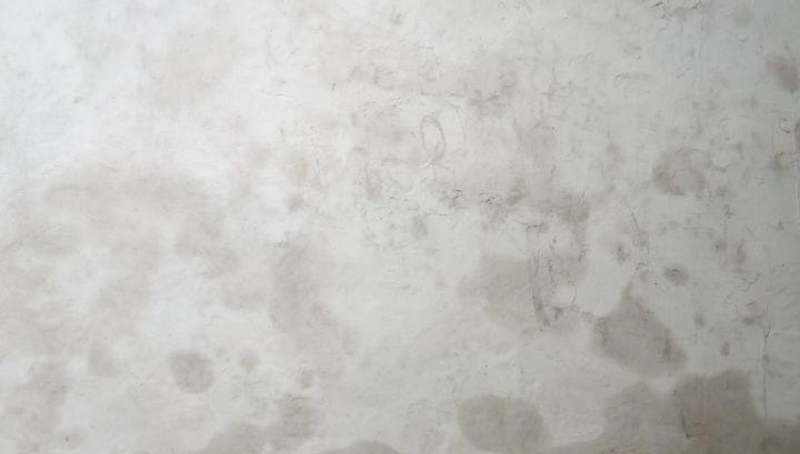